I often think to myself, ‘why aren’t people doing more?’

There are so many individuals who have platforms they could use to raise awareness, surely some of them must be using it for a cause that needs it, such as sickle cell.

Sickle cell affects millions of people throughout the world; approximately 15,000 in the UK and 100,000 in America. With those huge numbers, I find it hard to believe that only a handful of celebrities and people with large followings talk about and support such a common genetic disorder. So, I started digging… it’s amazing what you can find when you just look!

My search lead me to the National Football League (NFL) which, for those of you that don’t know is a professional American football league. It is considered one of the most popular professional sports organisations in the world, and some of the players from its 32 teams have been supporting sickle cell and raising awareness through a campaign called ‘My Cause My Cleats’.

The NFL has a 17-week season and during week 13 games, players are allowed to feature a unique twist on their usually strict uniform policy and wear custom designed cleats (shoes) that support different charitable causes of their choice. Each pair of cleats are then auctioned off with 100 percent of the proceeds going to the charity of that players choice. The ‘My Cause My Cleats’ campaign was introduced in 2016 as a result of players being fined over the years for using their uniforms as a way to highlight and support causes that they believe in. The success of the campaign last year convinced the NFL to bring it back for 2017, and last week around 800 players from the league participated.

I was overjoyed to see that sickle cell was there amongst the hundreds of other wonderful causes, so I thought it only right that I shine light and share with you all a few of the amazing players that were promoting sickle cell awareness.

“For this weeks #MyCauseMyCleats I am proud to bring awareness to Sickle Cell Anaemia. Not only has this disease taken the life of my mother but has also affected the lives of many. To all my Sickle Cell Warriors…I encourage you to stay strong and to continue fighting…” 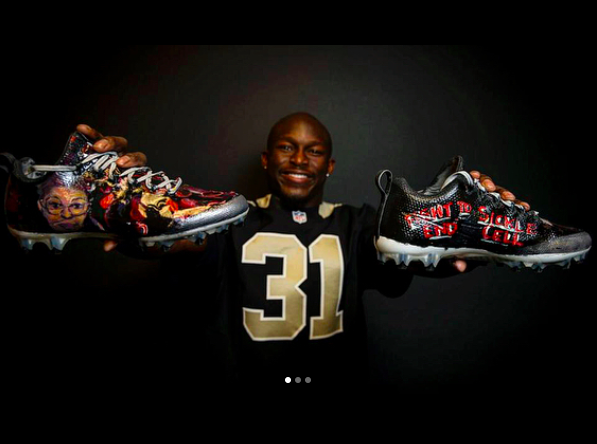 “My cleats support my own charity @gloryshopefoundation which helps tackle sickle cell disease; something my sister and countless others suffer from.”

“We will be representing our Tackle Sickle Cell Campaign with @embracekidsfoundation”

Mills’ chosen charity is the Sickle Cell Disease Association of America, in honour of his Nephew who has sickle cell.

Also supporting the sickle cell cause was linebacker Nic Harris who has the sickle cell trait, and former player Rodney Harrison who supports the Sickle Cell Disease Program at the Children’s Healthcare of Atlanta.

So, people are using their voices and platforms to raise awareness for conditions such as sickle cell and it’s beautiful to see.

The next time I watch the Super Bowl, I’ll be feeling quite proud.

This site uses Akismet to reduce spam. Learn how your comment data is processed.